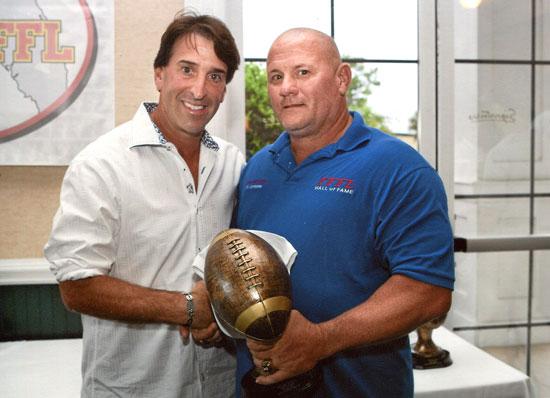 Sergio Rok with Norm McLean, commissioner of the Florida Flag Football League. Rok has been an avid player of the game for years.

The giant ring on Sergio Rok’s hand is impressive. It looks like a NFL super bowl ring, many times the size of a normal man’s knuckle. The resemblance is no coincidence.

The real estate investor and developer, who with his partners sold the Omni Center debt for a $50 million profit, was inducted in 2012 into the Florida Flag Football Hall of Fame.

Rok, 50, is known more for his real estate prowess.

His family company Rok Enterprises, which included his father Natan Rok until his death several years ago, has banked a large portfolio of property in Miami’s central business district during more than two decades of investment. The company currently owns 26 commercial and retail properties in Miami Dade County totaling 1.5 million square feet of space, with 17 of them located in Miami’s Central Business District. The portfolio of property makes Rok Enterprises the largest commercial retail landlord in downtown Miami.

Rok is not only the second-generation president of Rok Enterprises, but his 25 years of real estate experience is combined with banking entrepreneurship. In 2006, he sold TransAtlantic Bank for $175 million to Banco Sabadell.

Rok is an expert at workouts on distressed assets, which increased in volume and variety during the downturn.

He is a partner with Jimmy Tate of Tate Capital in an opportunistic fund, a partnership that often includes The Related Group, which buys the debt on distressed assets.

In 2012, the partners closed on about 10 purchases, and in the last three years has bought more than 15 assets with a market value of more than $600 million.

In 2012, Rok and his partners signed a deal to bring the first Walmart Neighborhood Market to Miami at the former site of Everglades Lumber.

But Rok, a father of two, still fits into his schedule plenty of flag football games and plays in tournaments around the state and the country.

He spoke to the Business Journal about this passion and his 2012 induction with eight of his peers. The league website, which has been hosting championships going back more than four decades, identifies him as ‘Sergio Rok, Legendary Coach & Player.’