OVERHAUL IS IN THE WORKS FOR MIAMI’S FAMED FLAGLER STREET

OVERHAUL IS IN THE WORKS FOR MIAMI’S FAMED FLAGLER STREET 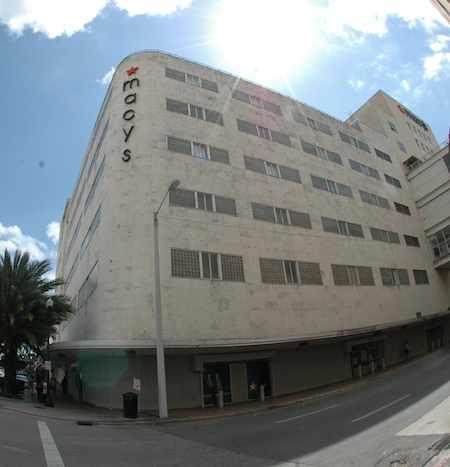 Macy’s department store in downtown Miami would likely benefit from an overhaul of Flagler Street.

The Related Group’s interest in turning part of South Miami Avenue in the Brickell area into a pedestrian mall is an idea Miami stakeholders and officials want for part of Flagler Street.

Whether that would involve closing part of Flagler Street for festivals and at select times on the weekends is still undecided.

“We haven’t reached that level of consensus from the retailers and property owners,” said Javier Betancourt, deputy director of Miami Downtown Development Authority, which helped create the master plan that includes the Flagler Street improvements. Business and property owners, like Sergio Rok, and city officials make up the membership of the Miami DDA, which uses taxes on area businesses to fund various programs, including the creation of plans and downtown improvement projects.

Betancourt said street closures might be done on a trial basis down the road using temporary barriers to get feedback from stakeholders and residents.

What we do know today is that the city of Miami has applied for between $10 and 15 million from Miami-Dade County to widen sidewalks and fix the area’s utilities and drainage between Southwest Second and Southeast Second avenues. That could make all the difference to big brand retailers like Macy’s, which has complained in the past that its store on Flagler Street is ill-served by the neglected roadway. Ideally, widened sidewalks and other improvements would make it possible for restaurants to have more tables on the street and draw new investment into the area.

Betancourt said Flagler Street is particularly hamstrung today by infrastructure-related issues like the location of underground utilities, which has resulted in big gaps between new tree plantings on the sidewalk.

“The idea is to do a complete reconstruction of the street,” he explained. “We are going to fix everything including utility and drainage issues below-ground, which then allows a lot of the above-ground stuff to happen.”

The Miami DDA has been working on the same vision for South Miami Avenue for some time, with a master plan that lays out details including wider sidewalks, tree plantings and the like.

Related’s Jorge Pérez told the Business Journal he had suggested to the city to stop car traffic along South Miami Avenue from Eighth to 13th Streets to make it more like Lincoln Road on Miami Beach. Lincoln Road is a huge draw for tourists and a hub for restaurants and other retail year round.

If the Brickell street closure were to go forward, even on a temporary basis, Related’s SLS Brickell condo-hotel project planned on South Miami could benefit, as might Swire Property’s Brickell CityCentre. That project has the avenue as a main thoroughfare through its expansive development of offices, residences, hotel suites, retail and other commercial now under construction.

Neisen Kasdin, co-chair of the Miami DDA and office managing shareholder of Akerman Senterfitt Miami, said there might be benefits to closing off streets on South Miami Avenue, but the same benefit might be achieved without stopping car traffic. Kasdin, who helped Lincoln Road rise to prominence during his tenure as Miami Beach mayor, said some stakeholders in the Brickell area might be opposed to street closures, temporary or otherwise, over concerns that it would limit access to area properties. It would also require ubiquitous parking to make pedestrian access convenient.

Alice Bravo, assistant city manager and chief of infrastructure, said the city is open to considering the South Miami Avenue pedestrian mall, but has received no direction from city officials to begin vetting it. The designs for the Flagler Street improvements are nearly done, but more work has to be done. A big step in the process would be getting money from the county to help fund the Flagler project, she said.