The city approved funding for the $24.5M project on Thursday 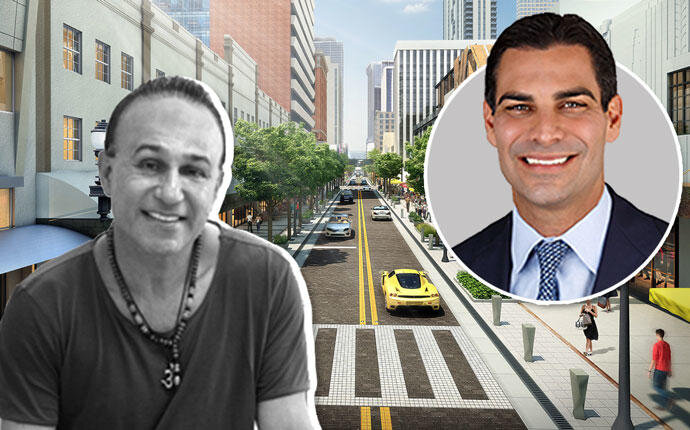 From left: Moishe Mana, Francis Suarez and a rendering of Flagler Street redevelopment

The long-delayed downtown Flagler Street project can finally move forward after the city approved $22.5 million in funding on Thursday.

The approval was the last step needed before the project, which is expected to take three years, can break ground.

The new design was proposed by real estate developer Moishe Mana, who owns many of the buildings on and near Flagler Street, and Zyscovich Architects. The new streetscape will include widened sidewalks, additional valet parking spaces, and larger shade areas similar to the wide streetscapes in cities like Michigan Avenue in Chicago or Rodeo Drive in Los Angeles.

The project initially began in 2016 but quickly ran into trouble with its contractor, FH Paschen, and only one block was completed. The contractor requested a roughly nine-month extension for the project, blaming delays on “forgotten old utility lines underground” that didn’t match city records, the Herald reported. The city fired FH Paschen in 2017.

This time, the city hired a new contractor, Lanzo Construction, for the project. The city of Miami, Miami-Dade County and the Downtown Development Authority are funding the construction.

Mana is downtown Miami’s biggest landlord with roughly 45 properties on and near Flagler Street.

He recently said he’s finally ready to move forward with his plans for the area. Over the past several years, Mana has spent at least $350 million acquiring real estate in downtown Miami, in addition to the land he owns in Wynwood

“We’re losing money every day,” he previously told the Miami Herald. “Be patient. It will take some time. I made a lot of sacrifices buying these buildings.”

Mana’s plans include creating a startup hub, and creating a “gallery row” nearby on Southeast First Street. A second phase of Mana’s plans calls for converting the old Flagler Station into a food court and tech incubator similar to Station F in Paris.