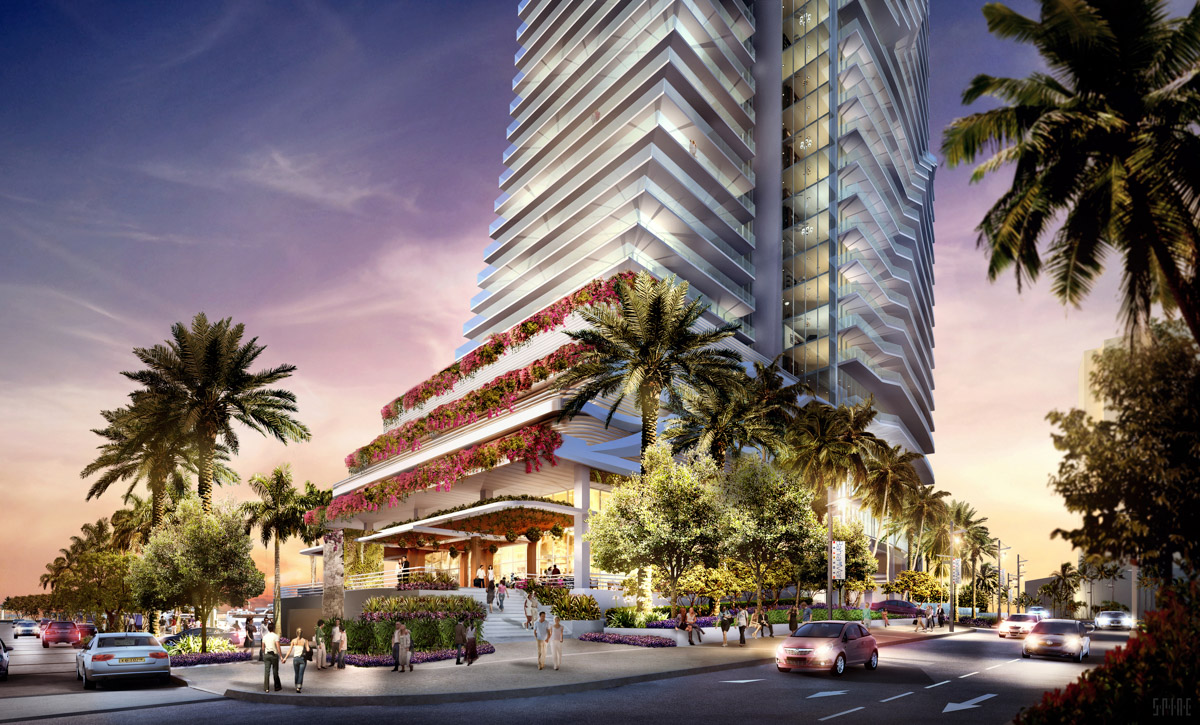 Fort Lauderdale city commissioners advanced a planned redevelopment of the Bahia Mar hotel and marina after the developer lowered the height of two condominium buildings from 39 stories to 29 stories, during a marathon meeting Tuesday evening that extended into Wednesday.

But the project is still pending an extension of the developer’s lease on the city-owned land at Bahia Mar on Fort Lauderdale Beach. The city commission is scheduled to consider the lease extension at a June 7 meeting.

The commission voted 4-1 early Wednesday morning in favor of a site-plan revision and rezoning request by the TRR Bahia Mar LLC, the company planning to redevelop the Bahia Mar hotel and marina, the main venue of the Fort Lauderdale International Boat Show.

Vice Mayor Dean Trantalis, who represents the district where Bahia Mar is located, cast the sole dissenting vote after a seven-hour public hearing on the site plan revision and rezoning request.

“I don’t want to see Manhattan on Fort Lauderdale Beach … This is a fragile ecosystem that we have on the barrier island,” Trantalis said, echoing the sentiments of most people who spoke publicly at the special meeting of the city commission.

During the public hearing portion of the meeting, which began shortly after 6 p.m. Tuesday and ended at 1:11 a.m. Wednesday, 54 of the speakers opposed the revised Bahia Mar development plan, and 21 supported it.

The special meeting of the city commission, which finally ended at 2:07 a.m. Wednesday, was a continuation of debate on the planned Bahia Mar project during an earlier overnight meeting February 2 , when the commissioners delayed action on the project.

Since then, TRR Bahia Mar LLC redesigned the project to lower the height of two 39-story condominium buildings by 10 stories each.

But 29 stories is still five stories taller than current zoning rules allow, so the developer requested a rezoning of the Bahia Mar property.

The developer also plans to renovate the Bahia Mar hotel, which operates under the DoubleTree brand, and to build a 727-space parking garage that would convert to show space during the Fort Lauderdale International Boat Show.

TRR Bahia Mar’s planned project also includes development of a supermarket, restaurants, retail stores and a public promenade around the perimeter of the property.

Mayor John “Jack” Seiler said keeping the annual boat show at Bahia Mar will be the city’s top priority in deciding whether to grant a land-lease extension to TRR Bahia Mar, whose principals include Miami-based developers Jimmy Tate and Sergio Rok.

Seiler said the project is contingent on an agreement extending the land lease on the 38-acre Bahia Mar property by 50 years, with an option to renew for another 50 years: “This may not make economic sense at the end of the day.”