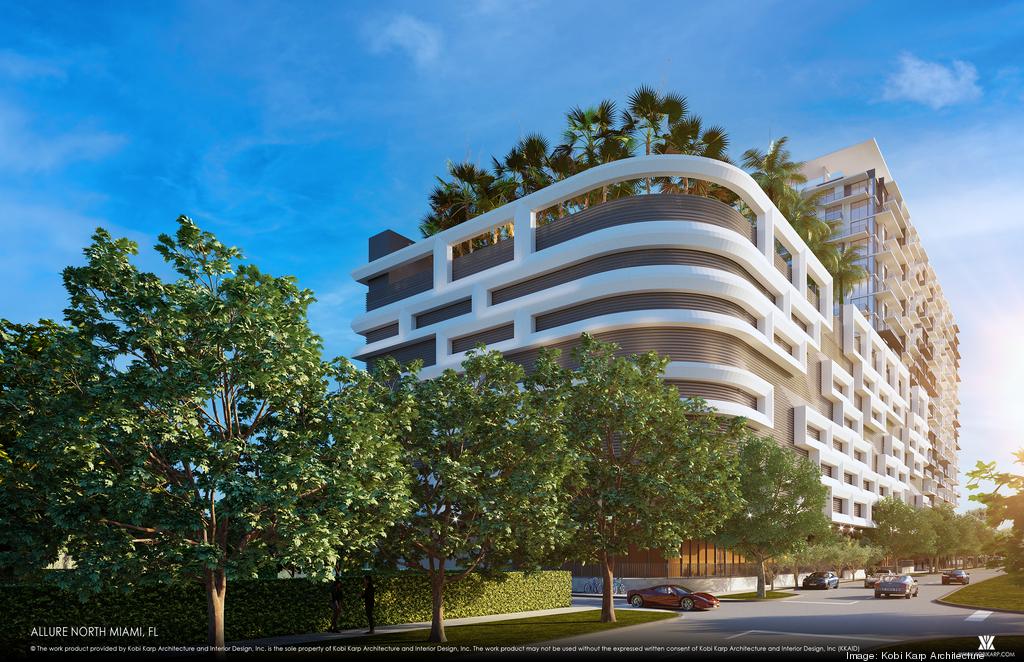 A view of the Allure apartments in North Miami

Totaling 736,065 square feet, the 20-story Allure North Miami would have 360 apartments, 8,429 square feet of retail, and a 535-space parking garage. The developer would dedicate 36 units to workforce housing for people earning 80% to 140% of area median income.

The median household income in North Miami is $41,611.

Tate said he hopes to break ground on Allure in late 2022 or early 2023. Miami-based Kobi Karp Architecture designed the project, which will span across 144th Street.

“Due to the narrow size of the two parcels, we challenged Kobi Karp to think outside the box while designing this mixed-use development,” Tate said. “Kobi knocked it out of the ballpark. We will have an architecturally designed bridge connecting the secured upper section of the parking structure to the residential building to the south for a safe and easy walk to and from the cars and residences in the south tower.”

The goal of this project is to transform the industrial area into a community with residential, commercial, restaurants, and entertainment, Tate added.

The developer was approved for $15.2 million in infrastructure grants from the North Miami Community Redevelopment Agency for the project.

Amenities would include a pool deck, a fitness center, a summer kitchen, a club room, picnic areas, and advanced package lockers.

“Our team has enjoyed working closely with the city of North Miami on this transformational development and look forward to this development being the start of what will become a growing and vibrant sector of the city,” said Michael Sperling, an executive at Rok Acquisitions, a partner in the project.