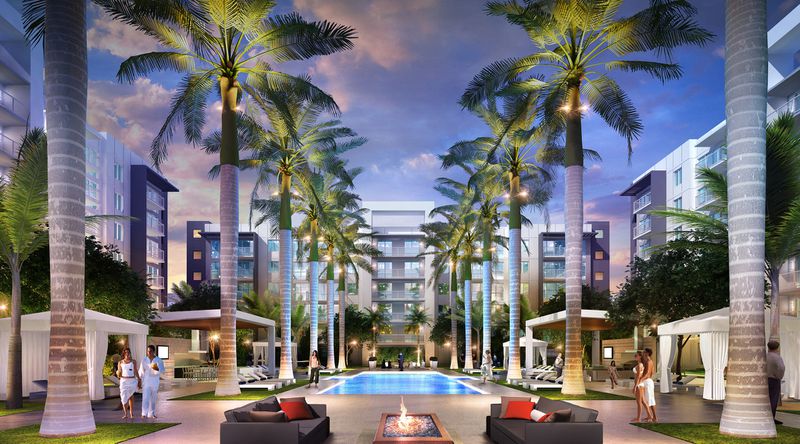 Residents of Altis Boca Raton will not lack for ways to blow off steam.

The 398-unit apartment complex, one of three new luxury rental projects helping to reshape the former Arvida Park of Commerce, will feature amenities such as private spa treatment rooms, a Zen garden, a nine-hole putting green and a yoga room and courtyard. There are even plans to have a spa for pets.

“It’s really going to be something,” said Joel Altman, chairman of Altman Cos., the Boca Raton-based developer building Altis along Military Trail north of Yamato Road. “We are driven to provide an excellent living experience. We want people to come home, have fun, enjoy themselves.”

Altis will have monthly rents ranging from $1,750 to $3,000 and is due to open by year’s end next to Park Place, a 64,000-square-foot shopping center under construction. The Fresh Market will anchor the plaza.

Altis, Allure Boca Raton and 850 Boca are the first residential developments in the 700-acre business park since the city changed the zoning to allow residential and retail in 2012. The projects account for 1,050 units, nearly half of the 2,500 units the city is allowing in the area.

The business park, in the northwestern part of the city, was renamed The Park at Broken Sound last year. For three decades, it has been predominantly an employment center.

Built in 1978, it once housed IBM and serves as the headquarters for security giant ADT and hundreds of other companies. However, city officials wanted to make the business park more diverse and keep employees from leaving Boca Raton.

The park caters to about 30,000 workers, but only a fraction of those live in Boca Raton, said Jamie Danburg, head of Danburg Management Corp.

Rents will range from about $1,800 to $2,800, Danburg said, adding that the first 180 units are on track to be ready by the end of 2016. The balance of the project is expected to open next year, along with the 10,500-square-foot Shops at Allure Boca Raton, which will have restaurants and boutique retailers.

“This will be the next generation of Boca Raton,” Danburg said. “It’s going to change the park tremendously.”

The 850 Boca project is going up on Broken Sound Parkway, near Yamato Road and Congress Avenue. The 370-unit community is being built by CC Residential, a partnership of Armando Codina and Jim Carr, the developers behind Monterra in Cooper City.

The first 850 Boca units are on schedule to open in October, with rents ranging from $1,750 to $3,000, said Andy Burnham, chief operating officer of CC Residential.

Keith O’Donnell, a longtime commercial real estate broker who worked with the city on the zoning change, said additional developments are in the pipeline.

O’Donnell said the apartments and retail are specifically designed to promote a pedestrian-friendly environment, where residents leave their cars at home and walk to dinner or the grocery store.

“There are no walls,” he said. “It’s all integrated. It’s mixing uses, so you have live-work-play in one marketplace.”