The estimated cost of the community is $71.5 million, which will also include a retail component. 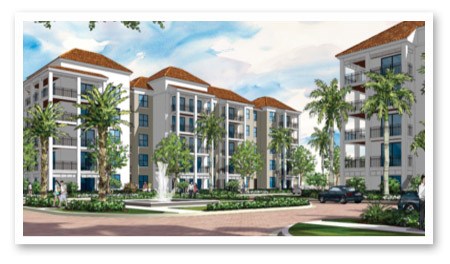 Ocean Bank provided a $50 million construction loan to finance the development, the loan representing 70 percent of the estimated total cost of $71.5 million for the construction of the property. Executive Vice President Ralph Gonzalez-Jacobo and Senior Vice President Eddie Diaz negotiated the loan for Ocean Bank.

The development site is located on 14.1 acres in the Park at Broken Sound live/work/play community, at the southeast corner of Congress Avenue and Clint Moore Road, a few miles from Florida Atlantic University, Mizner Park, Boca Town Center and the beaches.

“With the Boca real estate market primed for more luxury rental apartments, my partner and I saw the land as a prime opportunity,” said Rok. “The project was a good fit with Ocean Bank’s mission to serve businesses, so it all came together.”

Park at Broken Sound was formerly a business park known as Arvida Commerce Park, but was rebranded in 2015 to include residential units. Prior to the purchase, the land was owned by 6600 Congress Ltd., led by Boca Raton developer Jamie Danburg, who secured the zoning for the residential, retail and clubhouse uses of the land.

Ocean Bank is one of the largest independent, state-chartered commercial banks headquartered in Florida, with $3.28 billion in assets. Chartered in 1982, Ocean Bank operates its branch network throughout Miami metro.